How the Federal Government Seeks to Control Our Food Supply

Food prices are climbing, but soon will soar — inflation is ensured due to recent massive spending. As Americans are pushed to consume artificial meat as a solution to the alleged environmental impact of cow farts, the government seeks to expand its techno-monitoring, in the name of “health and safety,” by requiring the RFID chipping of all livestock. The argument is that animal tracking will protect the public from an animal disease outbreak.

This pretense to control all food production for health and safety is reminiscent of the argument that gain-of-function research used to create the COVID-19 virus was motivated not for bioweapons research but to “prevent a pandemic.” Writer Wendell Berry has been warning for decades that government agencies and academic bigshots conspire to destroy farms in the name of helping them.

The federal government, eagerly helped by the Vermont Agency of Agriculture Food and Markets (VAAFM), seeks to implant microchips in all livestock, beginning with dairy cows. But the pretended purpose of tracking safety is not served by imposing these requirements on small producers and on-farm slaughter operations, the businesses that are most thriving even before COVID, but which are the hardest for the federal government to track.

The threat of disease from farm animals is modest at best — especially in tiny, geographically dispersed, often closed (no animals coming or going) herds. My sheep and beef, for instance, are slaughtered on the very grass on which they dropped to the ground at birth — this is “cradle to grave” technology, long in use in Vermont without compromise to the health and safety of Vermonters. Yet in the interest of “helping” farms with RFID, the VAAFM recommends imposing some $1,500 start-up costs on them, ignoring the imposing economic burden this presents for existing and new small-farm enterprises. It’s as if the VAAFM wants to hurt them.

This is déjà vu. The feds previously offered incentives to VAAFM to pass laws that would have banned on-farm slaughter entirely. The pretense was to protect the public, when in fact the initiative put longstanding local businesses out of operation, helped large corporate meat producers to expand market share, and preempted new on-farm slaughtering ventures (contrary to consumer demand). Fortunately, we farmers stood up and successfully defeated these efforts — I proclaimed that I would defy the laws and keep selling my animals.

Now the VAAFM seeks to impose RFID technology on all animals. It is amazing how creepy this technology has become:

EID tags, also known as RFID ear tags are available for all species of domestic livestock and carry a unique identification number that allows animals to be electronically recognized and individual animal data to be stored automatically. … EID systems can be used as dairy cow Fitbits and capture numerous pieces of metabolic and other data. They can be used to automatically feed cattle with correct individual rations, and they can count cow steps, monitor cud chewing frequency, track milk production and capture other information that serves as indicators of overall health. … They are critical components of a bookend electronic traceability system, which accurately tracks an animal from birth to death and then requires that animal’s EID to be permanently retired. A reliable chain of custody is important to farmers, retailers and consumers because it ensures accountability to label claims the farmer may be making on food products derived from livestock, such as ‘grass fed’ or ‘organic.’

This is revealing — the government seeks to implement laws that will severely undermine small-scale farming, and uses as justification that it must track organic bona fides. This is almost as absurd as using industrial agriculture as an excuse to spend billions to eliminate farms in favor of industrial production of synthetic meats concocted in huge vats — with little research establishing the healthfulness of the products. (One is reminded of Soylent Green.)

A fatcat government agency (that believes hiring more state employees costing millions of dollars while farms close is the solution to failing farms) requiring farmers to spend thousands of dollars for their tracking technology because it is important to the farmers and consumers: the opposite is the case. Such bureaucratic paternalism is growing tiresome.

Vermonters, examine the parallels between this insidious cow-tracking technology, and what is being implemented in schools to track and record private “sensor” data on children — much more can be gathered from kids than cows, and the process is already underway in Vermont schools. Soon we will be told that tracking all humans with a unique RFID chip will be necessary to “protect” us. Big Brother is not your friend.

American history very clearly shows that small farms were never to be the province of federal government control, yet the federal government has striven for a hundred years to do exactly that, using state agencies and ever-growing legislation that increase costs for small producers while protecting market share for Smithfield Foods and Cargill Corporation. Is that on purpose, or just ancillary to well-intentioned efforts to protect us? 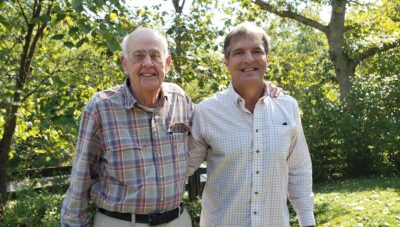 Wendell Berry, left, standing with the author at his Kentucky farm

Wendell Berry shares this view, and has been vocal about his position on RFID chips in livestock:

“If you impose this program on the small farmers, who are already overburdened, you’re going to have to send the police for me,” Berry wrote. “I’m 75 years old. I’ve about completed my responsibilities to my family. I’ll lose very little in going to jail in opposition to your program — and I’ll have to do it. Because I will be, in every way that I can conceive of, a non-cooperator.”

I stand with Wendell Berry, and Vermont’s small farms. I adhere to farming traditions with a strong 200-year history. I don’t need corporate purveyors of fake meat that pervert nature, or government thieves who expand their power at the expense of liberties and food security (and human health), to “improve” things for me and “save the planet” from cow farts. I will fight them to the death, because I will live free or die trying.

Perhaps microchips implanted in humans will save us from COVID-19, or some similarly man-made disease. But I don’t trust creators of diseases who pitch to me why they have to implant me with tech gadgets to protect me from said disease. Equally, I oppose the VAAFM or other government crooks from pretending they are helping me by putting me out of business, and tracking my animals for their own nefarious purposes (homeland security controls agriculture now).

The more damage the government does, the more it “rescues” us from that very damage — just like the technological crises we face are presumably to be solved with yet more wondrous technologies.